Storytime is a childhood treat. From Little Red Riding Hood to Hansel and Gretel, literature is a wonderful escape from the daily tantrums and hectic playground mischief.  The Goodordering bicycle shop in Hackney has decided to give story time a bilingual twist.

Every Wednesday and Thursday they host storytelling sessions in German and Italian for children aged three to seven.

Goodordering, which styles itself as an Urban Cycling Accessories shop, opened on Hackney Road earlier this month. It aims to help children to build confidence in expressing themselves in different languages and provide a space where they can interact with children who are bilingual.

Rhona Farrington, who works at Goodordering and runs the German sessions says: “Some children do not have an opportunity to speak in their own language and we want to create a family environment so they can express themselves.”

Farrington believes that a multicultural community such as Hackney should accommodate its diversity, and that there are not enough opportunities for children to explore language. With this in mind, she decided to hold weekly storytelling sessions.

The German story sessions are held on Wednesday and the Italian ones are held on Thursday. English speaking children are also encouraged to attend to help them understand, learn different languages and socialise with children from different cultural backgrounds.

Families are invited to the store for 45-minute sessions where children can interact with each other and feel comfortable speaking in their language. The children sit as stories are read in German or Italian and then rephrased in English. 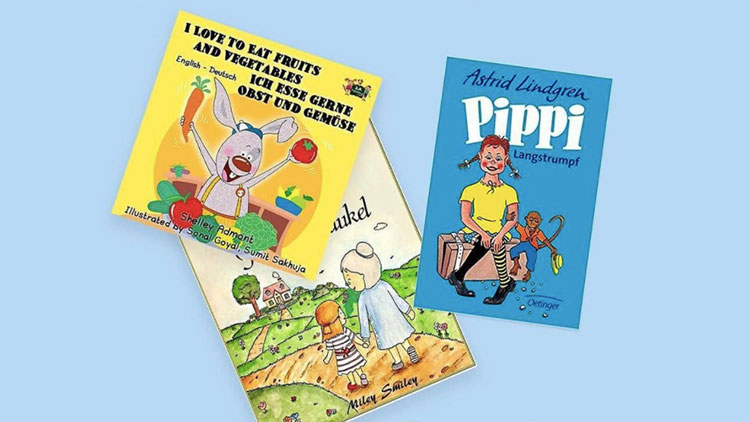 A few of the German stories read to the children Pic: Goodordering

“We are a family shop and we want to create a family environment,” Farrington adds.

Refreshments are provided and after the stories are read the children are encouraged to draw pictures about them which are then put up on a pin-board in the store.

Cultural exchange is an important part of Goodorderings values as the team that run the company come from Australia, Germany and Italy. Farrington says: “We have certain cultural events when people bring a traditional meal from their country.”

The shop wants to be an active part of the community and engaging with children through bilingual storytelling is one of the ways they do that. There has been noticeable progress in some of the children’s language skills. As Farrington pointed out: “Chloe, who comes from a French-English background, has started to develop a great German vocabulary, which shows that we are making progress.”

The story sessions are running until mid-December and they hope to start offering Spanish in January. There are also plans to expand the difficulty of the vocabulary and introduce higher reading levels.

Goodordering in In Famiglia magazine